I have just listened to the Reasons to be Cheerful Podcast No 98. “SMELLS LIKE COMMUNITY SPIRIT: bridging the inter-generational divide” in which the two inspiring interviewees have, I believe, redesigned how volunteering organisations can work. I’d already known of Ivo Gormley, who started GoodGym do good, get fit, and he was joined by Alex Smith From the Cares Family, which sets up networks of young professional and older neighbours.

Both organisations work with “volunteers” and are breaking down divides in communities and tackling loneliness. It’s easy to prejudge who are the volunteers and who are the beneficiaries in a relationship. But when you listen to the passionate and articulate pair you realise we are often wrong because it can be very empowering to be the person who provides the help. As Ivo Gormley says “we are are all only a tiny moment away from being the beneficiary”.

“Congratulations to the organisers and army of volunteers who helped make this happen” Dougie Vipond, The Adventure Show, BBC2 Scotland.

He was referring to the Event Team of 700 volunteers who have just delivered a Home World Orienteering Championships. A Team that was put together specially for this complex, week-long event that was broadcast live on TV. It was also held in parallel with the biggest ever Scottish 6-days making this the biggest and highest profile orienteering event ever staged in the UK. 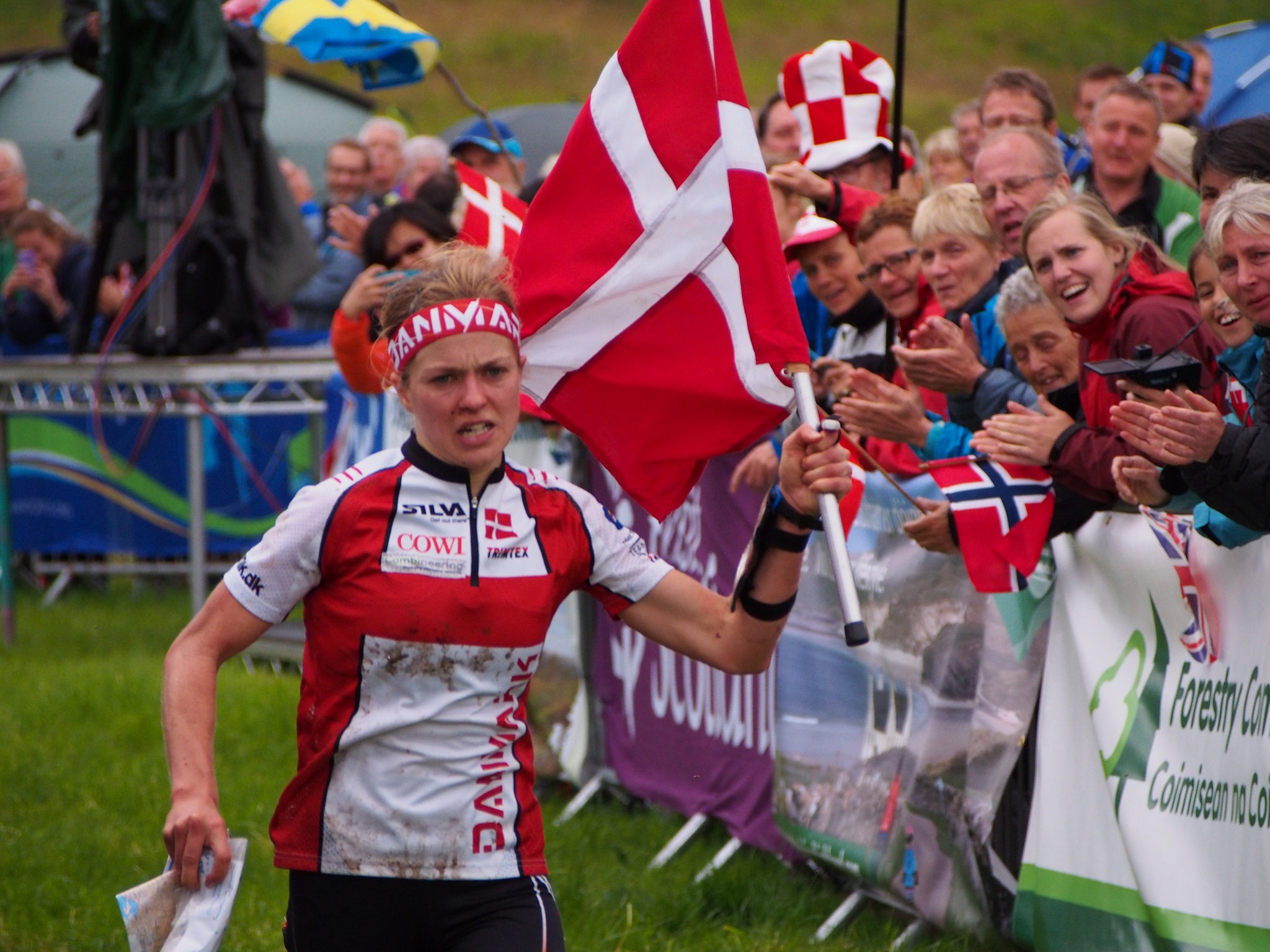 It was a good year for Denmark, Ida Bobach World Champion at the finish of the Long Race in Glen Affric. Courtesy Liveblog

In May 2012, British Orienteering’s Dave Peel, recruited me into the post of WOC2015 Volunteer Manager, as a volunteer, because he could see that the team needed experience from other major sports events. My brief: Recruit a workforce to deliver the World Championship and support the Scottish 6 Days in a remote part of the UK using volunteers from outside of Scotland, and ensure that most of the orienteering volunteers can take part in most of the 6-Days.

My induction came at WOC2012 in Switzerland. Here I learnt about silent starts and sponsors, quarantines and TV demands and strict International Federation Protocols that govern a World Championships. The London Olympics came soon after WOC, and my role as a Team Leader in the Aquatic Centre was a welcome inspiration.

We started by defining roles, identifying what could be done by people without orienteering experience, and recruiting and selecting the right people for different jobs. We had to develop our own recruitment and communication systems and I am grateful to Paul Frost, the SOA Web Developer, who helped me build a very effective volunteer recruitment website which was integrated with MailChimp for our sign-up and communication systems. I also promoted opportunities on the Volunteer Scotland website which enabled us to attract Commonwealth Games volunteers.

Of the volunteers, 120 came from outside of the sport of orienteering to do roles like sprint control marshalling, minibus driving and arena building. 580 were orienteers from all over the UK and Europe. 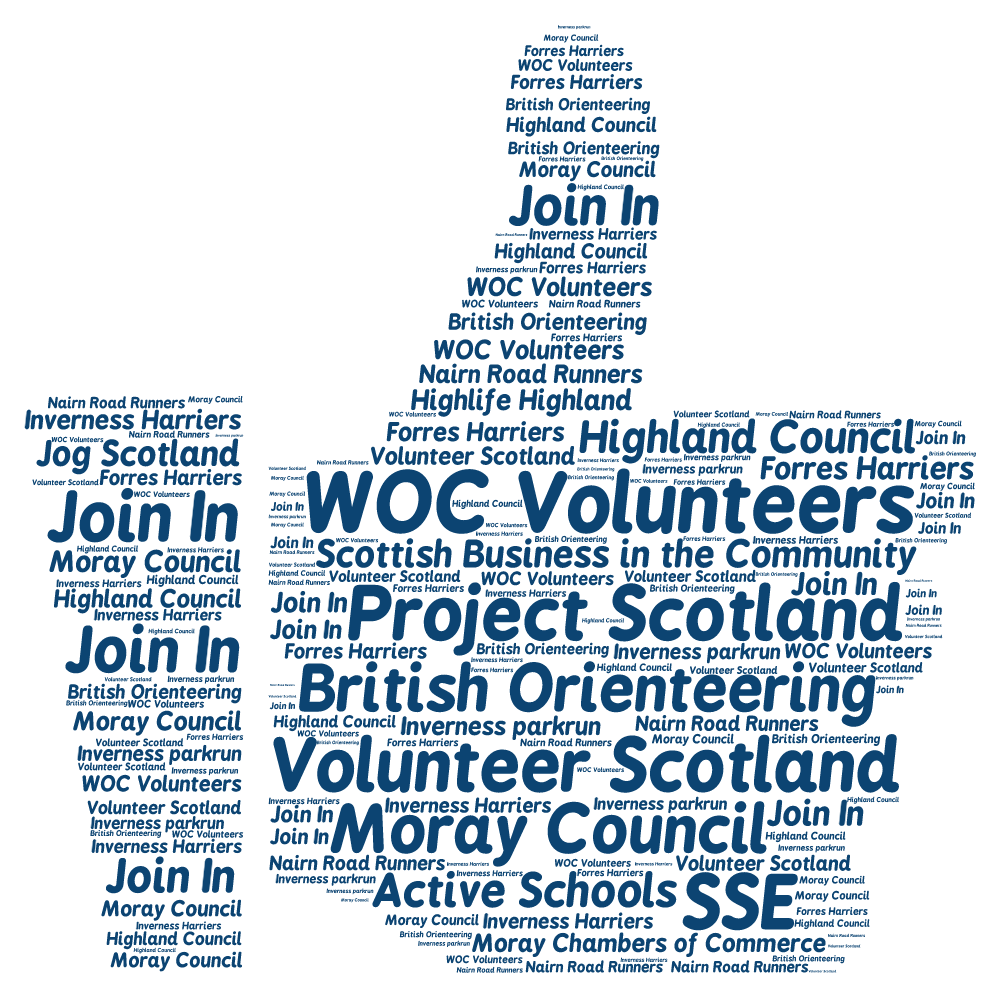 Volunteers came from orienteering clubs all over the UK and beyond, from local running clubs and parkrun, Volunteer Scotland, Glasgow 2014 and all of the organisations shown above

Everyone needed to understand the scale of the World Champs and the orienteers needed to see how it differed from regular multi-day events.  As nothing existed, we developed our own induction and training resources including videos from footage we’d recorded at previous WOCs. We wrote comprehensive briefing instructions for control marshals to make sure they didn’t jeopardise the integrity of a sprint race. We also produced safety and social media guidelines.

My team did some clever stuff with MailChimp to produce team and key contacts lists, and to send tailored, personalized messages to each volunteer, reminding them of their team and role and including relevant inductions. These tailored communications helped us achieve a 100% turnout of volunteers on the day. 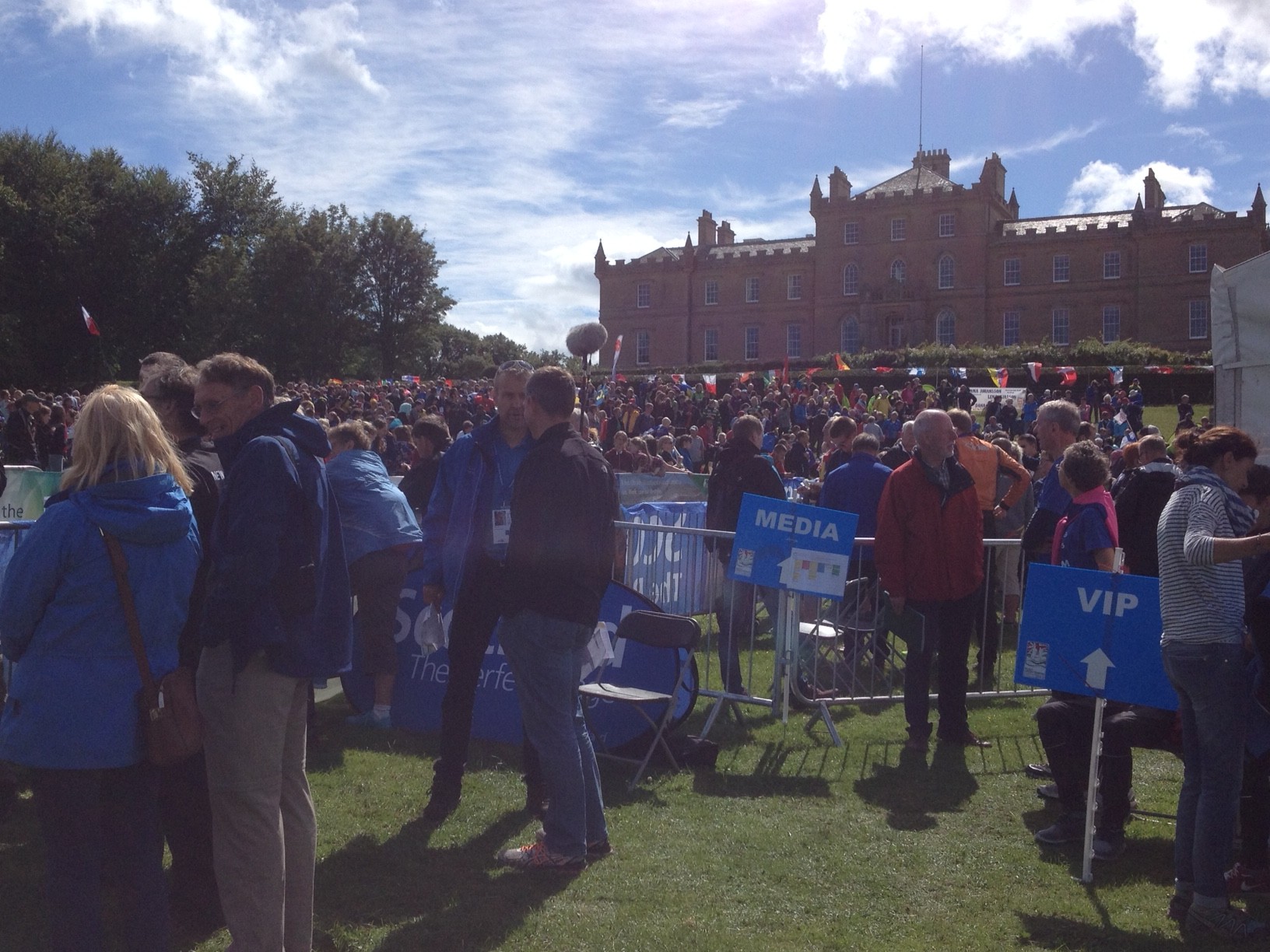 Crowds getting ready to watch the Relay in front of Darnaway Castle, Moray

All of the Event Team needed uniforms, photo accreditation passes and lunches – a significant undertaking. We also identified some unexpected obstacles which were extra challenges to overcome. Helping volunteers find affordable accommodation – we organised a homestay system. Overseas volunteers needed help with transport – we organised lift-sharing. Preparing non-orienteers for the vital role of sprint control guarding – we held a marshal training evening for local volunteers and it was a packed house. We worked closely with the 6-days to ensure that orienteers could have start times that were compatible with their WOC jobs. And there was one challenge that defeated us right until the end – providing helpful travel instructions to volunteers without breaking strict embargo rules of orienteering which keep map and location details strictly confidential until days before the event.

Minority sports can benefit from volunteers that are not involved in their sport. For orienteering, volunteers such as local runners, D of E students, and increasingly “Event Volunteer Tourists” can help at big events. And there are well established routes to recruiting them – like www.joininuk.org #BigHelpOut. But it takes an investment in time and the right people to recruit and support these volunteers. When working with volunteers who are not normally part of our specific sport’s culture we mustn’t forget to really look after them – tell them what to bring, train them and give them lunch.

A little bit of legacy

We worked with the Scottish Club Development Officers to offer all the local volunteers – many members of running clubs who had been sprint control marshals – a free entry into events organised by local clubs Moravian, INVOC and BASOC following WOC2015. This was both a thank you and a chance for the volunteers to try the sport that they had seen so closely, for themselves.

To all of the individuals and clubs who worked hard in the lead up and during WOC2015:

Thank you and we hope that you were proud to be involved in the biggest and highest profile orienteering event ever held in the UK.

To Paul McGreal, Event Director who skilfully and calmly managed a very complex event – it was a pleasure working with you Paul. I believe that we benefited hugely from Paul’s leadership and his experience as ED for Celtman and World Duathlon Champs. 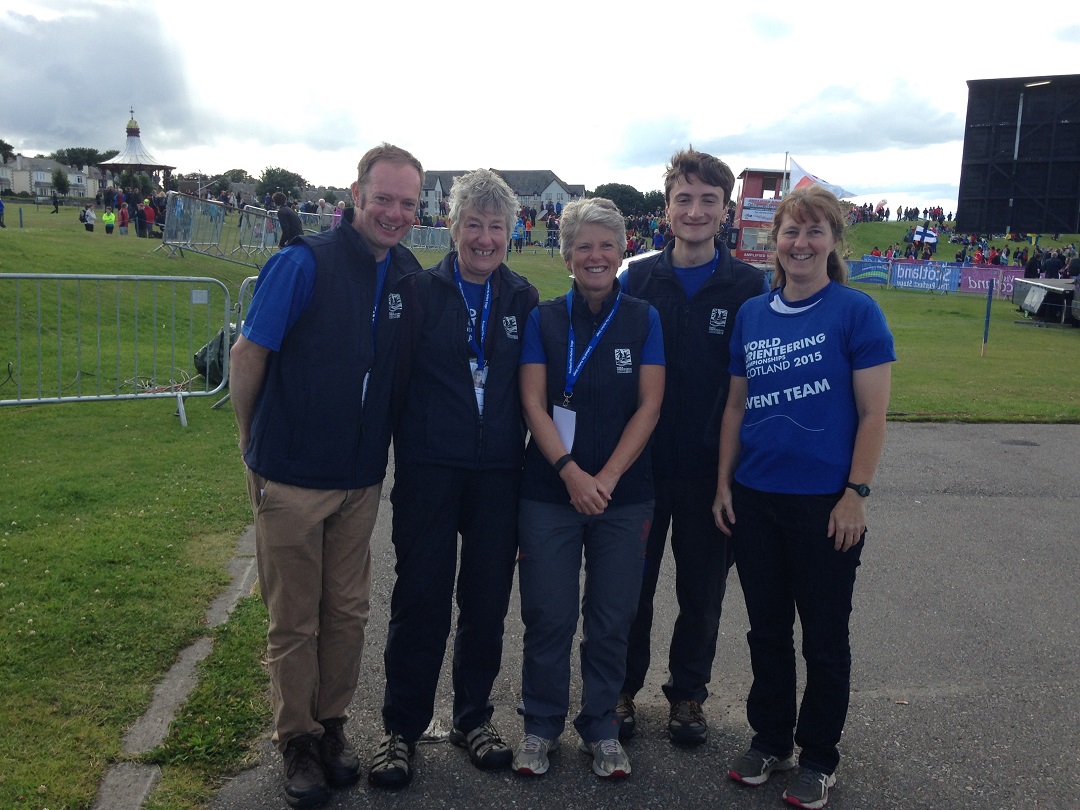 The heart of my volunteer management team

I’d also like to slip in a special thank you to my own team of 12, and in particular David Maliphant – Comms; Ann Haley – Data; Terry Williams – Newsletters; Craig Lowther – training.  We Skyped every fortnight in the 18 months leading up to WOC and only met for the first time in Nairn. 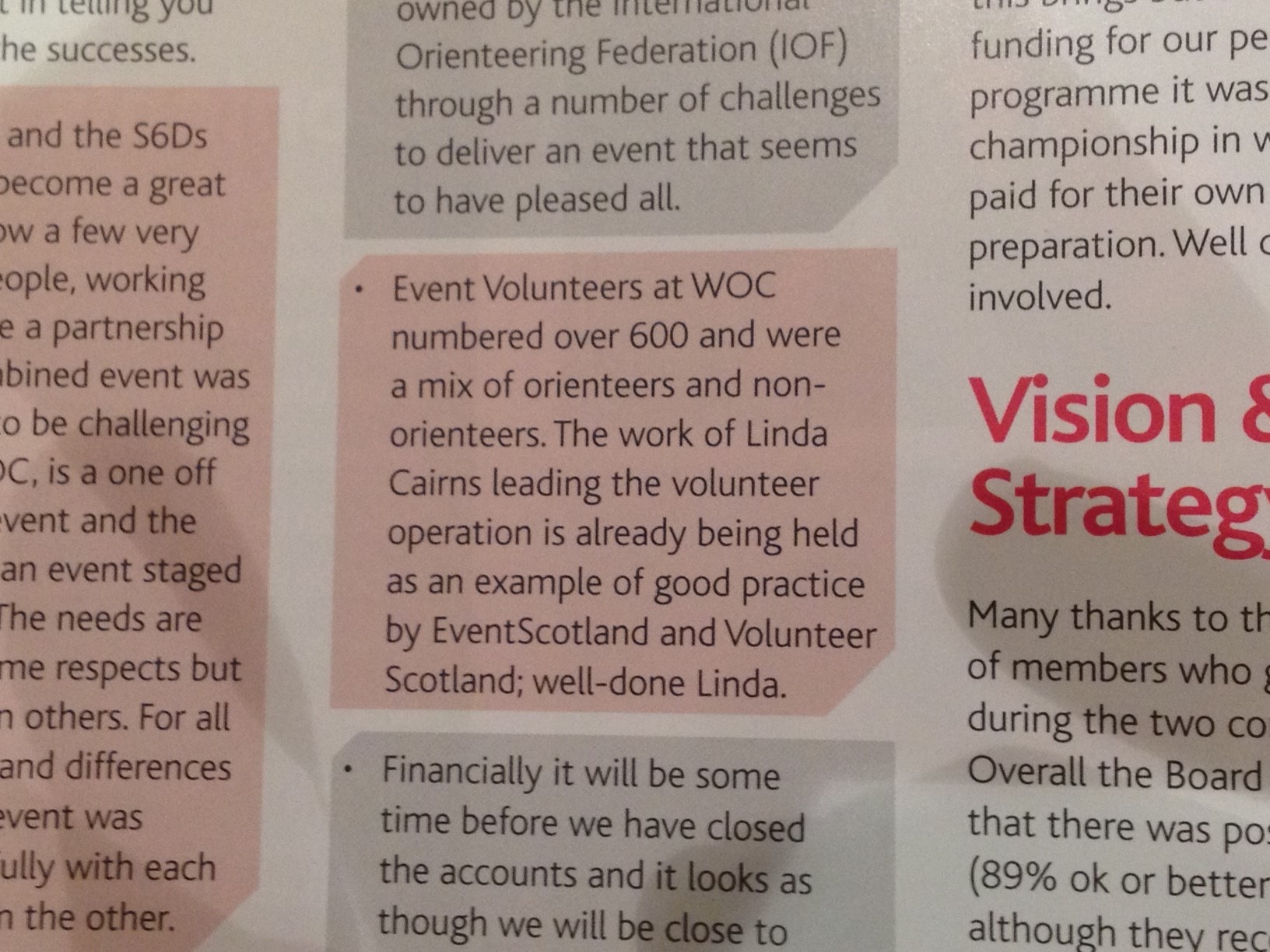 This post was published in part in “Orienteering Focus, The Official Voice of British Orienteering” in the Autumn/Winter 2015 Edition

The World Orienteering Championships, together with the Scottish 6-days “spectator races”, were held in Moray and Highlands regions of Scotland this summer with the Event Centred in Inverness. The VisitScotland Economic impact study has just been published and reports that these orienteering events, in which more than 8000 athletes took part, generated £9.4m for the Scottish economy. Guest houses, restaurants and shops among the businesses most to benefit. See BBC News Scotland piece here: Orienteering events ‘boosted Scotland’s economy’

This boost to the economy could not have happened without a massive amount of volunteering. All together around 1500 volunteers were involved in planning and delivering these events. The Scottish 6-days is staged every two years by the members of the orienteering clubs in Scotland. Hence the The World Championships, held concurrently, needed to look further afield to fill its “Event Team” of volunteers. The chart below shows where these people came from to stage this World Class event in Moray and Highlands. 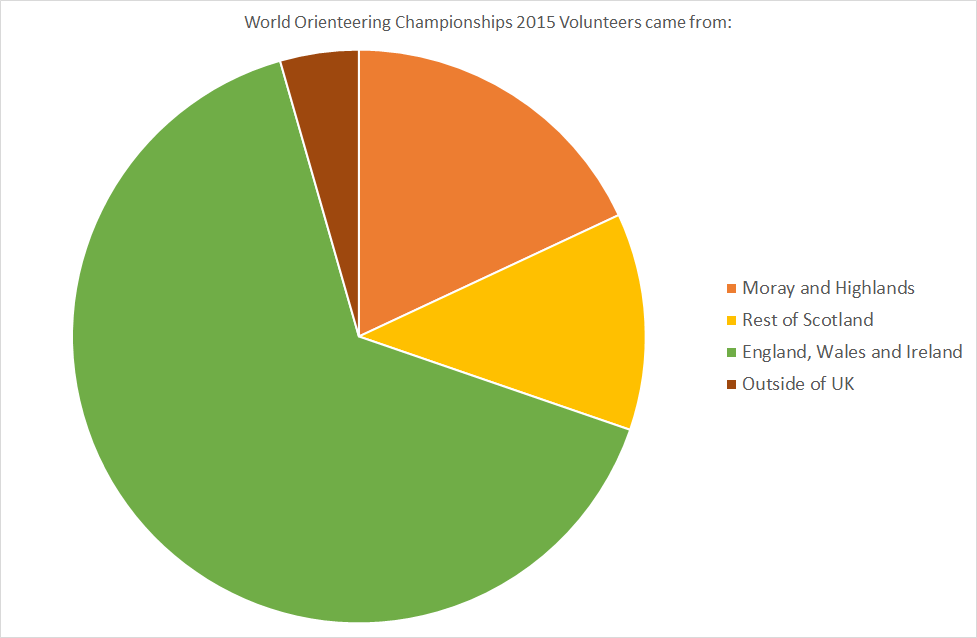 Almost a third of the World Championships volunteers came from Scotland. More than half of these volunteers from Scotland came in the form of local runners, experienced in organising running races, who wanted to help stage a World Class event on their doorstep. Members of the Technical team were also local as they needed to make regular visits to the orienteering areas to plan the courses. The Event Team also included Commonwealth Games Clydesiders who had enjoyed their part in Glasgow 2014 and wanted more – bringing valuable experience of high-profile sports events to WOC2015. The majority, 65%, of the volunteers came from England and Wales, with most, but not all, being club orienteers. We even had volunteers coming from further afield including Scandinavia and Eastern Europe.

The World Orienteering Championships was a successful, high profile event, shown on live TV, that received great feedback from top athletes. We now know that it also had a positive impact on the local economy.

On behalf of British Orienteering, The Scottish Orienteering Association and all the athletes that competed, I would like to say a sincere thank you to all the volunteers that made these events happen. Thank you to the Clydesiders, the locals, the runners, the club orienteers, the Duke of Edinburgh students, and everybody involved. You signed up to support the event because it was local or it was your sport, and maybe becuase it sounded exciting, but we didn’t imagine that collectively us volunteers would contribute so much to the local economy. 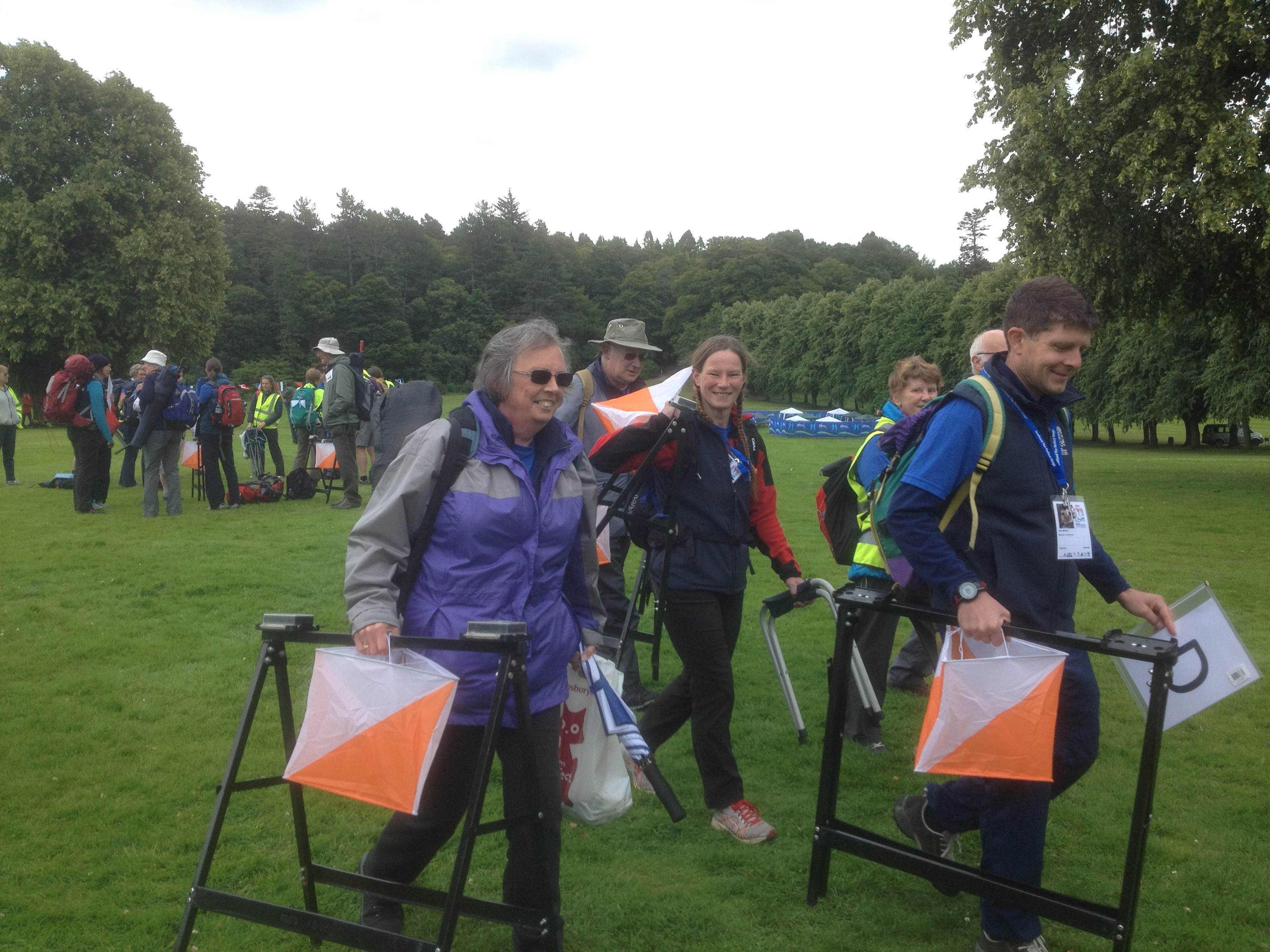